When I first got the invitation to ‘Climb with Coors’ in Colorado, an annual trek to Wilson Peak, the 14,023-foot mountaintop you always see in the Coors Light logo, I didn’t hesitate to say yes. As a mixed-race Black and Indian woman in the travel media space, I don’t often see images displaying people of color climbing mountains, so I was excited to confront the stereotype. Plus, I’ve hiked to mountain peaks before. What would be any different about this?

Well for starters, the challenge is called “Climb with Coors” – not “Hike with Coors” for a reason. I completely downplayed the ‘climb’ part and nonchalantly signed up for an adventure that turned into the most difficult one of my entire life.

So let’s step back in time to the very beginning of the story.

First, I receive an email with tips on how to prepare for the climb, and I ignore 50% of it. I adhere to the advice concerning shoes and clothing, yet overlook the bits about how to physically train. I think I’m in pretty good shape – granted I’ve been traveling and filming a lot lately so it’s been awhile since I worked out, but meh, whatever. I know I got this.

I pack my bags, fly to Colorado, and arrive at Hotel Telluride where I meet the rest of the Coors Light climbing crew. I’m immediately drawn in by the infectious energy of the group. Everyone has a uniquely awesome personality and they’re all badass to boot. I’m amongst skiers, snowboarders, mountaineers, and all-around adrenaline junkies.

And then there’s little ole’ awkward me. The more time I spend with this dynamic group of daredevils and stalk their Instagram pics, the more I start to notice my definition of “adventure” is basic AF.

“There’s gonna be a lot of scrambling on this one.” (errr…ok, sounds fun)

“We’ll be taking the shorter, but steeper route, filled with tons of class 3 climbs.” (what??)

Well damn. Maybe I should have read that email more thoroughly. This sounds a teeny bit different from the hiking trails I ‘tackled’ at Lion Rock in Hong Kong, Lion’s Head in South Africa, and the Beehive in Banff, Canada.

Clearly, there are levels to this shit! Oh well. No turning back now.

THE HARDEST DAY OF MY LIFE

Finally, the day of the hike climb arrives. It’s 3:45am, and I’m nervously fumbling around with my gear in the hotel lobby. The guide hands me a headlamp, harness, and helmet. I stare at the items blankly and take a deep breath. Another confirmation that this is no joke.

I sit in near silence on the 1-hour drive to the Rock of Ages trailhead as everyone else excitedly chats around me. They aren’t nervous at all, but their confidence isn’t doing much to help mine. I have already accepted that they’re in a different league.

We arrive at the trailhead at 5am, and it’s pitch black outside. I turn on my headlamp, smile, and record a quick Instagram story. I take out my Sony cam to start vlogging too, but before I can even finish, everyone starts moving. Wait, already? But, I’m not ready! Are we really doing this??

I naturally fall into the back of the line. 5 minutes in, I’m panting. The elevation isn’t doing my lungs any favors at all, and I’m just praying I don’t get altitude sickness like that one time in Peru.

Then a searing pain shoots up my inner thigh (later, I find out it’s a “groin strain” according to Google). FAN-FREAKING-TASTIC. I’m already trailing behind and then add a groin strain to the mix. With each step I take, my poor groin gets more and more stressed out, but I muster up the mental strength to block it out. It’s too early in the game to give up.

I try not to be embarrassed as one of the guides falls behind with me to keep me safe. The rest of the group is way ahead of me at this point, and now I have my own personal cheerleader to help me through this. Tyler is his name, and he keeps telling me I’m crushing it! His reassuring voice is the only thing keeping me from collapsing.

I hike for what feels like hours, before the sun finally starts to pop its radiant head out. I miraculously catch up to the rest of the group just as they are finishing up a short rest. I stop to rest too, effectively widening the distance between us once again. I’m confident I can catch up though. The trail is starting to look a lot easier! I take my camera out to capture the mesmerizing splendor of the sunrise as I slowly continue on.

Not long afterward, I realize it was all a trick. That moment of peace and ease was really just a mirage masking all that class 3 climbing and scrambling I was warned about.

At some point, I look up in horror as I finally see the rest of the group. They are tiny specs way up above on what looks like a towering maze of loose rocks. This shouldn’t be possible. How are they doing this and at such a fast pace? How will I ever catch up? Thankfully, there’s one other girl, Morgan, who has fallen behind too, making me feel slightly better about all this. She, too, is suffering from an ailment that is impacting her speed. She’s nauseous and feeling the effects of altitude sickness, but together, along with Tyler, we reluctantly keep climbing.

There just isn’t an end to the difficulty! Every time I think we’ve gotten past the hard part, it only gets harder. I’m paralyzed with fear as Tyler patiently guides me through a class 3 scramble in particular. He tells me to use my foot to test each rock before I step on it because it might be loose. I try to replace the thought “one wrong step, and you fall to your death Ash” with something more positive like “you got this Ash, keep moving.” It works, but I start to sound like a total psycho, literally ping-ponging negative and positive thoughts as I try not to cry, or worse, give up altogether.

ON THE EDGE OF VICTORY

I keep trekking and now I’m 4.5 hours in. Tyler suggests we stop for a break, but I have a weird feeling. His tone is different, face thoughtful as if he is preparing to tell us some bad news.

This is the heart-sinking moment when I’m a mere 2 hours away from the peak, and Tyler insists we turn back due to my [snail’s] pace and the threat of a bad thunderstorm. We are so close. But we are also already an hour behind the rest of the team, and it only gets increasingly tricky from this point on—like this is the part where we’ll need to bust out our helmets and harnesses. If we attempt to summit at our current pace, we are guaranteed to get caught in a dangerous downpour during the most difficult parts of the climb on our way back down.

Tyler looks shook. He has clearly experienced this before and is visibly unsettled by the memories.

My heart feels heavy. I just sit there, on the verge of tears, wondering if I have somehow failed people of color. I am weighed down by the self-deprecating thought that my failure is going to add fuel to the stereotype that black people don’t do the outdoors.

Despite the agonizing pain from that inner thigh muscle I pulled and the ominous storm that’s approaching, I still want to push through so badly. Tyler, however, is right. And although he appears to be giving me a choice to turn back or keep going, I know he isn’t really asking me. He is basically telling me in the gentlest way possible that this is the end of my climb.

NOT THE END—A NEW BEGINNING

As I sit motionless at the rest stop, sulking and struggling to accept defeat, a couple approaches us on their way up to the summit. While listening to their conversation with Tyler, it becomes clear they are climbing pros and have done this many times. One of them turns to me and asks if I’ve ever done a 14er before. I shrug and tell her I’ve never climbed anything. Her eyes nearly pop out of her head. “And you chose Wilson Peak as your first climb?! Most people work their way up to this!” she exclaims in disbelief.

That’s when it finally dawns on me. I’m not a failure. I succeeded in trekking to 13,222 feet with absolutely zero prior climbing experience—or let’s be real—any athletic ability at all. I’m not a climber. I’m a traveler who enjoys going on basic ass hikes here and there in different countries. But this isn’t some leisurely stroll up Stone Mountain. This is a huge fucking deal and nothing to shed tears over. This is something to celebrate.

We turn around and head back, battling through all the earth-shattering thunderclaps, lightning, rain, and marble-sized hail good ole’ Ty predicted. My entire mood is different though. My feeling of disappointment is replaced by excitement as I fully receive the epiphany that I just accomplished something truly spectacular.

DIVERSITY IN THE OUTDOORS

My inability to summit transformed from a failure into the beginning of something awesome.

It sent me down a rabbit hole of researching other people of color who had attempted climbs like these. Surely I wasn’t the only one. And sure enough, I was right.

I found online publications like Melanin Base Camp dedicated to increasing diversity in outdoor adventure sports; and uncovered article after article about black and brown folks conquering the outdoors. I read about Abby Dione, the first black woman in the U.S. to own an indoor rock climbing gym. Next, I marveled at Expedition Denali, the first team of African Americans to blaze a trail up America’s highest peak. And then I came across Sophia Danenberg, the first African American to summit Mount Everest—she’s Black and Asian, just like me.

These are all examples of people who have broken down boundaries for people of color looking to embrace nature. They paved the way for explorers like me to comfortably pursue experiences mostly marketed to white adventurers.

So allow me to conclusively answer the question—do Black people climb mountains?

Hell yeah, they do. And now I’m one of them.

I want to thank Coors Light for affording me the opportunity to inspire other travelers of color to get out into the wild. To the rest of the brands out there, please take note. Inclusion is sexy. 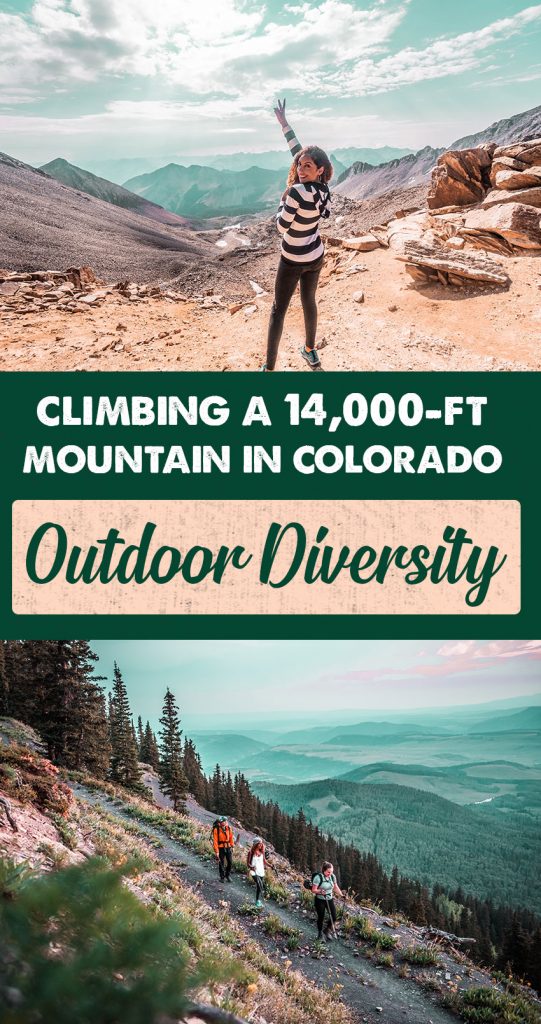